Sorry New Yorkers but ask anyone and they will tell you that New York Fashion Week always plays it safe out of the ‘big 4’ however, it would appear this month is a little bit different! Here’s our round-up of what everyone is talking about at this September’s  NYFW.

It’s been on the cards for a while but the fashion industry are poised on tenterhooks on that frow as this season finally brings the ‘see now, buy now’ model. As Ralph Lauren recently said to Vogue ““showing clothes, then delivering them six months later … it’s over”. Although the innovative leaders in this were Burberry here on UK soil (obvs) there is no denying the ripple of change can be felt in many different areas of this season’s shows across the pond, over at New York Fashion Week.

In a nutshell J Crew just blew the fish out of the water! They’ve just shown their new collection and shunned professional models. The people that modelled at the show were all friends or family members of people from the brand. They ranged in age, from 13 to 70 and included people of all shapes, sizes and colour. It’s no secret that diversity is a huge contention when it comes to Fashion, at the Fall show in 2015 models of colour accounted for just 20% of the people on the catwalk. However, the last two fashion weeks have been the most diverse in the fashion calendars history and the only way is up. Bravo New York.

Well, of course, it was always going to be shrouded in drama and controversy. There is no denying that Mr West has good intentions at heart, his shows, after all, revolve around black female empowerment. Unfortunately, he may have taken it a step too far by advertising for “multi-racial women only” it certainly kicked up a stink, but then again, thats what he does best. Oh yeah, there was also the small matter of the models fainting due to exhaustion in that 2hr delay in sweltering heat. However, we should not let that overshadow the fact that this show had some strong pieces, the earth tones are just that, with the intention that they are timeless which is a positive step in the ethical direction. It’s also decidedly the anti-christ to fashion in that he calls his garments ‘apparel’ – which does make them all seem  rather favourable to us normal folk. With prices starting around a reasonably respectable, £150 – Let the lady see the Yeezy!

What happens when an old hand like Tommy Hilfiger comes together with model of the moment Gigi Hadid? A fashion show at a funfair in Lower Manhattan, that’s what! Tommy always like to push the boat out on his shows, 2014 saw both the arctic and the beach landing in Manhattan especially for Mr Hilfiger, but a full blown funfair is pretty next level. The show was very much nautical themed with statement pieces teamed with leather trousers and fringed scarves for an edgy look. The classic signature styles of both Tommy and Gigi were evident in the various pieces, tops, tees and hoodies paired with over the knee socks. It would appear there is no stopping Gigi Hadid and when you consider that she has more Instagram followers than the number of people that live in NYC, it’s no surprise really. Looking forward to seeing what she does next.

The fashion elite sat up and noticed VB a long time ago but I think this season is her best yet. Drapes, creases, crushed velvet and not a high heel in sight. As the designer talked through her show backstage she explained that the clothes were designed in a way so that they have a ‘thrown together’ look. They used traditional fabrics but washed and creased them to give them femininity. In a world filled with chaos VB’s show was like a summer night’s breeze. More of the same, please. 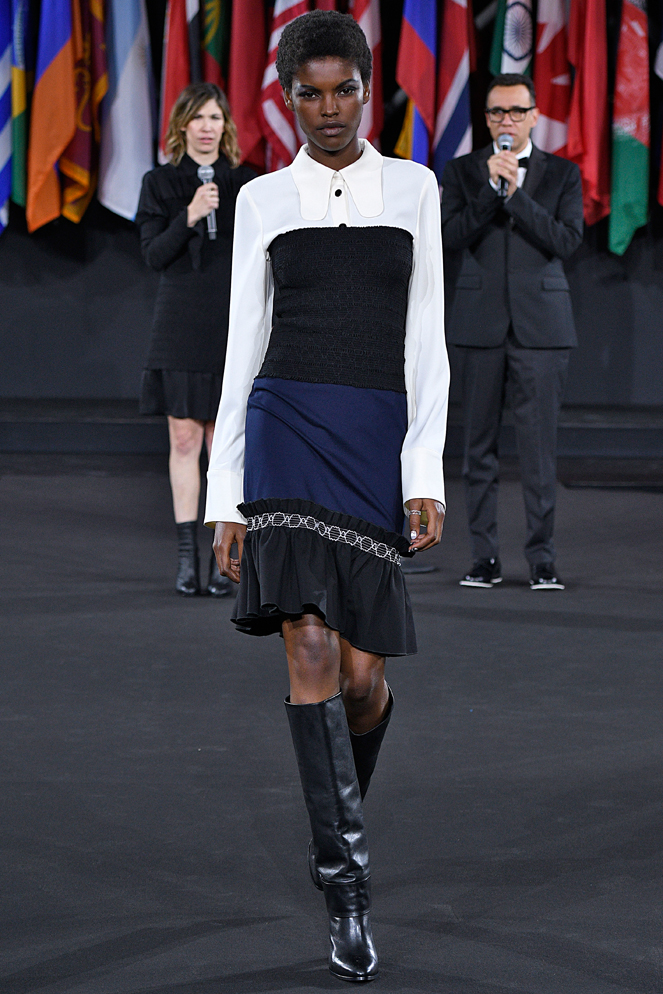 With the election looming stateside it seems only natural that Opening Ceremony would use their show to create a ‘pageant of the people’ and voice their opinion on the future of America, and quite rightly so given the current state of affairs. In the run up to the show Opening Ceremony have been asking some well-known American citizens (including none other than Whoopi Goldberg)  what it means to be American and posting it on Instagram with the hashtag #OCforvoting. I love this idea, it’s very current and it’s a fab way to communicate with millennials on the subject of voting. The garments certainly reflected the serious tone of the show, navy and black certainly had that ‘quirky office’ vibe and it looks like layering is here to stay too. Totally fabulous of OC to use their show as a political platform, that’s what fashion is all about.

Well, that just about rounds it up, fun fairs, black female empowerment, 70yr old models, political platforms, and a spice girl. It’s no wonder everyone is talking about  this year’s New York Fashion Week Spring 2017 shows. Until next time…TTFN. x