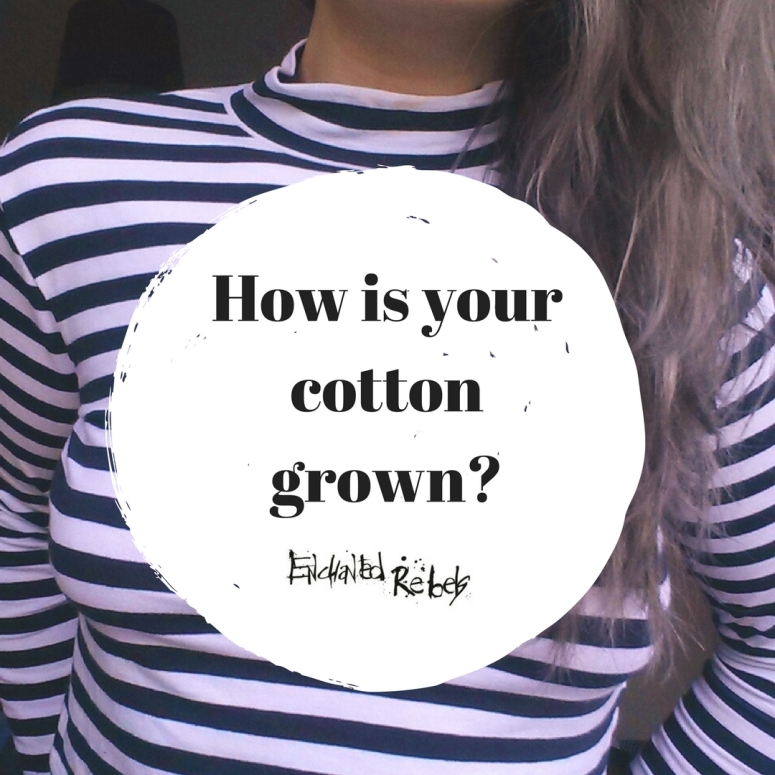 I conducted a twitter survey to get a bit of an idea as to how many of you knew how the cotton industry works and a whopping 52% of you responded to this survey with an answer of ‘no’. I guess a lot of us don’t really think about where or how our clothes are made. Have you ever gone shopping on the high street and ended up purchasing a new t-shirt; the cheapest one you could find? We’ve probably done that more times than we can remember. Now I’m not saying you shouldn’t do that- if that’s all you can afford go right ahead. I am not judging, I mean I’m far from perfect. I have purchased cheap clothing from time to time – in fact they are some of my favourite pieces. I am simply writing this to inform you about how the cotton used to make your t-shirt is actually grown. I wish someone had told me exactly what I was wearing a long time ago and I would have stopped buying into the high street craze.

Cotton is a plant that is grown in a field. It is a soft and fluffy fibre that grows in a protective case called a boll. The cotton plant is native to tropical/ subtropical regions of the world. Where are they you ask? Well mainly in the Americas, Africa, India and Australia and this plant uses 2.5% of the world’s arable land. Producing a staggering 25 million tonnes of cotton each year and using over 2.6% of the global water supply. That is crazy, don’t you think? Cotton is therefore the world’s most important non-food agricultural commodity.

But it comes with a cost

And I don’t just mean the financial expenses. So cotton is grown using a huge amount of chemicals; pesticides to be exact. And this costs a lot of money to provide, farmers apply about  $1,310million [£1,020 million] of pesticides to cotton crops each and every year which is far more than any other crop worldwide. Due to all the chemicals added to the crop, cotton has become labelled as the world’s ‘dirtiest’ agricultural commodity. Along with this financial cost; there are the many environmental & health costs. With runoff from production polluting the waters in the regions in which cotton is cultivated, threatening water quality & affecting the marine biodiversity either with immediate toxicity or through the long-term accumulation. Not only is this process killing wildlife it affects us as humans too. Did you know that according to World Health Organisation around 1 million farm workers from cotton fields require hospitalisation each year from acute chemical poisoning? It is insane to think that someone ends up in a hospital bed suffering from pesticide poisoning just for our clothing. A lot of people hoard this clothing and it doesn’t even get used in their lifetime; is this really necessary?

Why are pesticides so hazardous?

Pesticides are designed to inhibit the growth of organisms by simply impairing the essential functions for life, basically killing the organisms so they don’t ruin the quality of cotton. Yes, the aim of them is to kill so these chemicals are going to be dangerous to us. They impact human well being as I mentioned above around one million people are poisoned every year, so what actually happens? The pesticides interfere with both the human nervous system and the reproductive system preventing nerve cells from communicating with the body and symptoms range from acute to chronic; these are weakness, lack of coordination, difficulty breathing, loss of consciousness, seizures and even death.

One deadly pesticide used is Aldicarb; an extremely powerful nerve agent. One drop of this chemical absorbed through the human skin is enough to kill an adult & despite its toxicity, this chemical is used each year; US$112million [£87million] worth to be exact. The fact that 60% of the most hazardous pesticides are not banned in the world & are still being used in the cotton industry is scary; harming humans, animals & the environment. This Genetically modified cotton is used in the majority of cheaper clothing items for stores such as those typically found on the high street that many of us shop in. we are effectively contributing to this damaging industry.

What if there was a way you could change this?

Well there is a new industry that has been growing in popularity, it’s organic cotton. The cultivation of this cotton is now happening in over 20 countries throughout the world and has increased 5 fold in the past 4 years. Why is this industry different? Organic cotton is grown free from pesticides & all harsh chemicals. This form of farming saves so many lives and doesn’t result in the hospitalisation of cotton farmers. With reduced risk to the environment, there are no chemicals polluting the water supply; so using organic cotton is obviously the better choice. It will of course cost a tiny bit more than that on the high street; but would you not rather spend a little more knowing that your cotton t-shirt didn’t cost someone’s life? I know I would! Let’s start spreading awareness of how damaging the cotton industry is and encourage people to start buying organic, ethical clothing.. Ask questions about where and how the cotton is grown before purchasing, the little things can in fact make all the difference. Do your bit and start living ethically.

Sophia Leigh is a vegan lifestyle blogger who is passionate about making change in the world. She loves to get lost in nature & drink cups of tea. You can follow her adventures over at @sophialeighblog and for all of her vegan musings you can visit her blog here.

Enchanted Rebels own brand collection is manufactured with 100% organic cotton. You can shop the collection here.